I want to thank EVERYONE for your support and kind words in the biggest ever tragedy of my entire life. I appreciate your prayers for mom and for my well being.
I don’t know how to grieve and what to expect next. This has shaken every DNA of my body and I don’t know what is waiting for me next. No one is prepared for this day. I have been crying like a baby since I saw her wrapped in that white sheet of clothe.
She was widowed at 41. She raised three children with grace, humility and hard work sacrificing her entire life for the well being of her children. We were her only assets.
She raised us with major difficulties and more importantly prayed for us so that we make something of our lives. It was only her prayers that made me reach from a possible life of a Manual Rickshaw Puller in UP to a Civil Engineer in the USA.
I have met major calamities and survived coz Maa was wind beneath my wing that kept me flying. Now I feel like I have no wings, no strength to face the next day.
Since Maa’s departure I have thought many a times to kill myself and to join her. I have complete faith that, like she saved me in this World, she wud find a way to save me there too.
But I think my mom wud not approve of that move.
So, If u see a 50 year old crying like a baby on the street of Mumbai, in a local train, in a bus, in a graveyard pls don’t worry. I am ok. I am just grieving my mom. Bas. I am just trying to get up and start my life or whatever is left of it.
Because more than anything else, I know my Maa wud never want to see me slip into depression. She wud never like to see me do crazy things with my life.
As far as crying, she was ok with it as she once remarked “First do everything for the dead properly, then you grieve”.
I am just following my Maa’s word like I did for the last 50 years of my life.
Please bear with me. 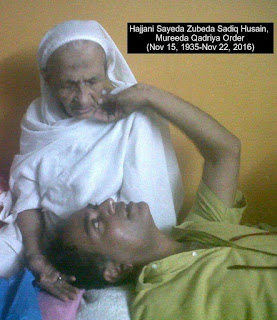 On 22nd November, they buried my heart in this grave.Since then I am a dead man walking, with no heart, heart beat. Nothing. 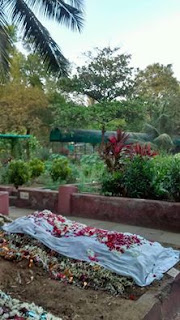 Labels: Maa, Maa died, Mother, Mumbai, Shahid Sayed, When world crashes right before ur eyes, Zubieda Sayed
And when the most beautiful n brave woman in the World struggles against old age, and when u realize the limits of medical sciences u feel helpless.
This is when u wanna unlearn all the scriptures of the World, the rules of society and all that good for nothing nonsense drilled in ur brain.
You wanna question whoever claims to be the creator and more, as u don't have the luxury to go on searching for the answers like a Buddha!
#Zubieda Sayed, #Mumbai, #Maa 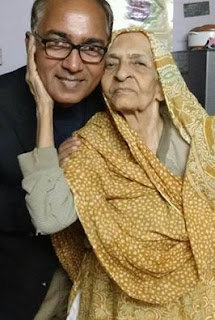 The day that changed the World..

I don't think any of us wud forget what we were doing on September 11th 2001.
I was the Project Manager on a 8 million dollar project called Jimmy Carter Blvd in Gwinnett County, Atlanta, GA.
My first Independent project as a Project Manager, after I was trained and equipped by my employer in the arts and science of building roads n bridges. It was exciting time to be managing a path breaking project, and I was looking forward to its completion.
The kinds of reception, whistles and applause you get, after removing all barriers and traffic control devices to allow that first motorist to go thru, on the road you just build, still gives me a high.
I had just returned from my graveyard shift and was sleeping when my in-house girl frnd woke me up to break the news.
What we saw brought shock, disbelief, horror, fear and confusion. Like most Americans, I thought it must be a mistake but then the second plane hit and then I knew its more than that.
All day was spend in watching TV and absorbing the images of fear, tears and sufferings. For weeks stories that emerged kept me troubled. I still feel for the guys n gals that chose to jump from top floors...
Our World changed that day for worst.
Soon news stories started showing up of how the Arab looking or Muslims are targeted and humiliated in public places. Fortunately, I was in a great company of frnds and co-workers. Not a single incident that made me feel I am a Muslim or an outsider.
On the other hand when me and bunch of coworkers / hommies were entering a cafeteria, the African American security person stopped them for a check up and allowed me to go without frisking. After I passed thru security, I realized what she did, my humor kicked in, so I went back to her asking
" Hey you did not check me, I cud be a terrorist?"
"Not with that face honey...not with that face....go on..."
That is the American spirit that always rises from the ashes. That is the spirit we need to nurture in each other - if we want the world to not slide in the one way slope of darkness, bigotry and fear.
World can be beautiful again....yes it can...
Posted by Ye manzilen !! at 12:52 PM No comments: 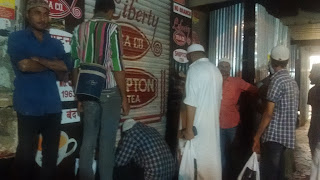 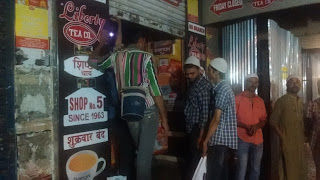 When I got there, the tea shop was already closed for the night. The staff was standing outside unwinding - chatting.
" Chai khareedni hai"
" Kal Subah 9 baje aayen....abhi to dukaan band ho gayi"
The manager wearing a skull cap and kurta pajama spoke in a matter of fact tone.
"Kal subah hi nahi hogi bhai"
"Kiya matlab?"
"Aap ki chai pee ke meri subah hoti hai......chai nahi hai ghar pe.....suabh kaise hogi?"
The manager, giving keys of the shop to one of his employees shouted
" Aye Dukaan khol"
I smiled. I got what I wanted, and was not surprised. Have done these kinds of acts a million times by now.
In one of the stories of " The Arabian Nights", the prince's path was blocked by a boulder on the mouth of a cave. He recites a mantra " Khul Jaa Sim Sim " and the boulder gives him room to go in and rescue the princess.
Vidyawaan of the world tell us it was not the mantra that opened the mouth of the cave, bu the " Lehjaa" ( the way to speak) that did it.
I could not agree more...
I can open any door, anywhere, any time in ANY country - even in my sleep with my "timing" and "Lehjaa". This magic comes only when one has a transparent heart, a sense of humor and who cares attitude to the outcome.
Despite this a few doors just wouldnt open....
Thats the irony my frnd....thats the fascinating irony!!
Posted by Ye manzilen !! at 2:46 PM No comments:

Why women are not allowed in Mosques in India? 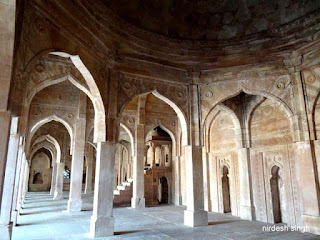 There are hundreds of other examples I can name where female worshipers were allowed in the mosque like Jama Masjid of Mandu, Feroz Shah Mosque in Hissar, Haryana, Jahan Ara mosque in Agra and Jama Masjid of Chanderi (MP), not to mention in the US all mosques have room for them.
Which genius came up with the idea that Aurat = Gunah in India?
Please enlighten....
PS: My frnd Mirza loved the sight of his then In-house girl frnd looking for him in a vast crowd after Juma prayers.....u feel like a MAN, he says as "she used to ignore everyone else"....LOL
http://scroll.in/article/803090/what-history-proves-indian-mosques-barring-women-is-only-a-recent-trend
Posted by Ye manzilen !! at 10:51 AM No comments:

GA Tech, 1990
It was drizzling when I come out of the Civil Engineering building that night. Since lots of assignment due the next day, I had stayed back to finish them not realizing it was well past mid night...
As I came out of the the college building, the first thing I noticed was rain, and a lonely pick up truck which was passing by on the street. To beat the cold weather I decided to run home. I had barely taken a few steps that I had a mighty fall due to the slippery surface.
It was embarrassing even that late at night, so I looked up to see if the driver of the truck saw me fall. Well, he or she did. The truck had come to a complete halt.
I got up slowly, picked up my books and other stuffs and started to walk. I glanced at the truck one more time. It was still not moving. It is only when I had taken a few confident steps that the truck started to move again....
Later, I realized what really transpired.
The truck driver saw me fall and take a hit. He or she decided to wait on me to see if I needed any help. When I got up and took some steps, the driver realized that am ok and started to move again.
Its been 25 years, and dont know who the driver of that pick up truck was. I dont even know it was a male or a female, and old man or a young dude my age. The only thing I know is that he or she was a human enough to care about well being of a foreign student in his or her country.
This is how "evil west" treats its students....
The link below shows how we take care of them!
Of course, we are the best!!
http://www.mid-day.com/articles/shocking-mob-strips-parades-tanzanian-woman-as-cops-watch-in-bangalore/16923169