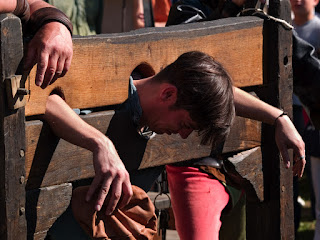 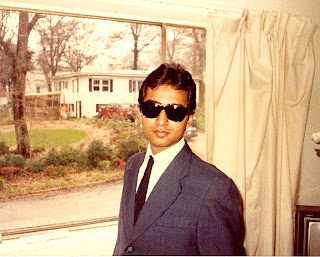 Late Nov 1989.
I juggle / attempt a few more jobs in the meantime. They range from donating my sperm to working at a gas station to volunteering for a staircase case design study, in which "volunteers" were asked to fall down on it.
The last job that made me real mad was at a carpet showroom. It was bang opposite the Brookhaven Marta Station. Even though the job was to sell carpets, the owner once put me in a Pillory out on the street. I was tied, my head placed in between two logs of wood. By the time I realize, the whole story, it was too late.
In the medieval times, criminals were put in Pillories to get abuse and humiliated, before the punishments meted out to them.
There I was, standing with my hands and neck squeezed between two pieces of logs - in full public view - under the sun. Anger, and hurt visible in my eyes and pedestrians and those driving by looking at me with curiosity. I am calming myself by saying " This is Halal Rozi...Its ok - I can take it!"
But I could not... I leave that job the next day!
These days when we do workshop on entrepreneurship under my NGO " Threshold Initiators", we emphasize the need to be do business with ethics. That businessman, who put me in a Pillory as a marketing gimmick was not a good man... not an ethical one for sure!
Dec First week, 1989.
I receive a court summon asking me to appear for a "deportation hearing" at the INS building, downtown Atlanta.
Until now, I was hoping that the "system" after looking at my academic record, would let me off the hook. I will be forgiven for a lack of judgment or whatever. Now, my humiliating deportation to India is certain. I hear stories after stories of how people were taken straight from the courtroom to the airport. Deported.
The court hearing is still a month away. On the top of the summon they have written " Shahid SAYED V/S United States of America!", which means my personal rebellion has taken a new form now.
I have no choice but to fight and rebel against the country that I travel so far to.... a country I loved.
Dona and I have decided to not engage an attorney but show up ourselves at the court. Whatever free time I find from my jobs, is spend on researching the INS laws that I was charged with. I have decided to represent myself at the hearing.
Second week December 1989.
I get a call from the INS agent asking me to see him in his office. He has a proposal for me. I meet him. He is willing to drop all charges he says, "If I help him bust a drug dealer." He informs me how they will put “body armor” on me, "wire me" and provide me the address to show up as a customer for buying drugs. They will listen to the conversation and at some point of time; they will barge in and arrest everyone.
I will be a free man again!
Growing up in India, like most Urdu readers of my generation, I too wanted to be Ali Imran of Ibne Safi's detective novels. The problem was unlike Ali Imran 007, who enjoys a lot of "things" before he takes on the bad guys, I was suppose to deal with gangsters on the very first paragraph.
And there was no sign of Juliana Fitzwater as well...so I refuse!
Someone from the mosque makes me another offer: He can get me a Green card on an Agriculture worker visa, provided I am willing to take up a new name and new identity.
Loss of identity? I would rather go back to India than lose my name. I refuse!
And then comes the all time classic offer: Get married to an American girl on paper, and no one can throw me out.
First marriage, wrong reasons. No romance. I refuse!
I am sure, I can write a few books on " How to be flexible in life to achieve your goals"!!
Court date is upon me!
My first court appearance in any country....
Dona, compares me to Kevin Kostner character of " Dances with Volves", who was hounded by the Federal agents for no good reasons. All he wanted was a peaceful life of love and happiness...
I can live with that...
3/5 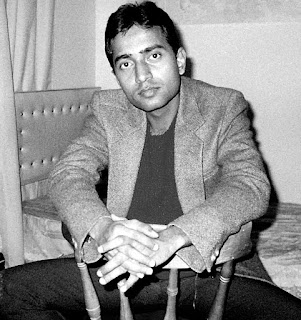 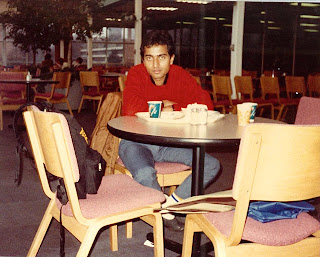 After keeping me in custody while he was filling out paperwork charging me with breaking US laws, the officer allowed me to go. He took my mug shots, my fingerprints and handed me a motion or something stating what US laws I have violated etc. Earlier during the day he drove me to my apartment and did some preliminary search. Looked at my stuff....pics ...and took away my passport.

It was so humiliating to go up to my apartment with my handcuffed like a criminal. My roommates were also in the same "work-boat", so after initial shock of watching me with cops, they were hiding and praying that I don’t reveal their names...

The office escorted me out of the building. He blurred " You are a good man Mr. Sayed!"

What a feeling it was to be free again! Yet freedom it was.  To walk without getting noticed. To go anywhere I wanted. I walked and walked all the way to Cheshire Road, an off campus community near Georgia Tech - to my apartment!

Then I went into a serious depression...

My friend Ted Schelling had come over to pick me up. He wanted to take me to some "Dinner for International Students" arranged by some Socio-Cultural organization at a hotel. I had told him and not going, yet he showed up. I was too depressed to be social. He was trying to get me out of my pathetic state of mind. Reluctantly I went with him.

By the time we got there, the program has already begun. The hall was full of international students from all countries. Not many seats were empty. I notice one empty seat in the last row.  Here I was with my unshaven and unkempt sitting there staring at the stage blankly.

The speaker mentioned something and everyone started looking at a pamphlet or something. I did not have one, so I looking around to see what it was...just then white women sitting on my left stretched her hand to show me what it was. I noticed her for the first time. She smiled.

"You can look here!"

At the end of the program, the Organizers requested the Americans present in the audience to invite one international student for the Thanksgiving Dinner to their homes.

Dona by knows the whole mess that I am in. She wants to help me whatever way possible. I am trying to be brave. But how much brave you can be when you are in a new country, have no job and need money for tuition for the winter session. And yes, you have a court case coming up.

I call up various attorneys from the yellow pages about helping me out. They all quote huge amount. I have problem feeding myself where I am going to get that kind of money. My diet has become "Omletty" these days. I eat egg for breakfast, for lunch and for dinner.

My recent frnd from India N.K. (who is a good story teller in Mumbai film Industry now) offers to take me to the nearest Kroger for shopping essentials. The nearest Kroger was miles away, poor KN used to drive three times that distance to pick me up, take me there, wait till I finish shopping and then drop me back home.

After doing my routine of Maatam (Depression, reasoning and resolution) I have decided to fight it out. I can’t be home sitting all day feeling sorry for myself. I am not going back to India without a fight.

I need a job again. So rejoin the same job. I told myself “they can’t charge me twice for the same crime”

I am doing three jobs now. The Egyptian owner of gift shop was so kind that he hired me back taking a risk with me.
My day starts at 6 am. I am gift shop of Holiday Inn by 7 am. I take off from them at 3:30 pm and come home for lunch. Then I go to my on campus job at gymnasium for 2 hours and then I head for Sandy Spring to work in a Baskin Robbins Ice Cream shop till 11.

All day my mind drifts into calculating my earnings the day in dollars. Then I convert those earnings into Indian currency.

Every night while mid town to my apartment, I go to Georgia Tech to check my mailbox. I am desperately waiting for some letter to arrive from India. With heavy heart and hope I open my mailbox…. only to find letters for Jennifer Drummond, a girl who is sharing my mail box.

I come out of Student Center Post office and sit down on one of the steps outside.

At the end of those crying sessions, I remind myself “ There is no India for you Shahid, no one except Maa. You are alone. You have to fight this all alone…this is home…. there is no India…. no India now! 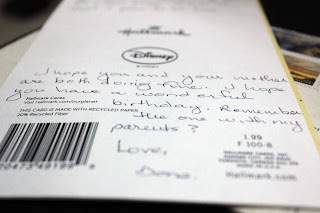 My birthday wishes card from her has arrived... It is card no 25.
Why 25? Coz she and I have known each other for 25 years!
In these 25 years, between US and India, I have changed my address at least a dozen times. But she always found my address to send me my birthday wishes. Every year....year after year!
A lot changes in 25 years....people meet, fall in love, drift away. Lots n lots of new experiences come and go. Career goes from Arsh to Farsh to somewhere in between. 25 years is a damn long time.....Time is cruel. It changes everything!
Not her...
This time, even time failed to change the arrival of this birthday card from her to me. Even though, at times, I failed in reciprocating the same on her birthday or chose internet cards to wish her. She always stuck to the paper card via snail mail. Same Hallmark card...same last two words " Love, Dona!"
This is her story...
Nov, 1989, Atlanta, GA
I am in serious depression. Have not been eating properly since my arrest. How could someone eat or sleep if the biggest dream of your life ( of getting education in America) just got busted. I am looking at a deportation form the US back to India. My crime: I was working off campus without proper INS permission.
One morning a couple of INS agent approached me in the gift shop I was working at and asked me " Are you Shahid Sayed?". I said " Yes I am"
"You are under arrest...lets go...." all they said and handcuffed me.
My world collapsed right before my eyes. I knew its over. They made me sit in the back of the police car like they do to hardened criminals. I have tears in my eyes. I am thinking of mother. How would she take this....How would she react to see me back in India without my Masters degree in Civil Engineering?
Tears pick up intensity....
I look at the streets of downtown Atlanta.....my story is over within 6 months of arrival in this exciting country. A country of hope, humanity and justice. Now, I will be deported for earning money to pay my bills, to save money for my tuition at Georgia Tech.......to stay alive!
Posted by Ye manzilen !! at 1:03 PM No comments: 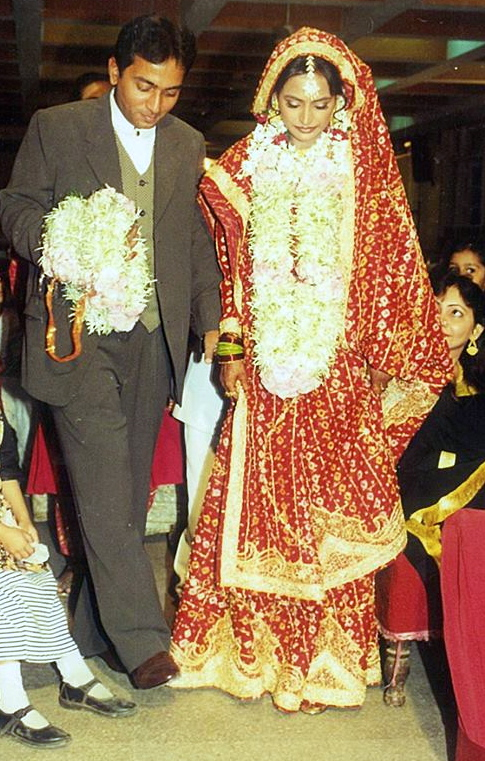