Maqbara of Najibabad, near Bijnor 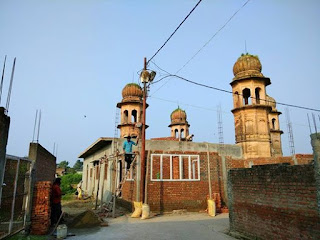 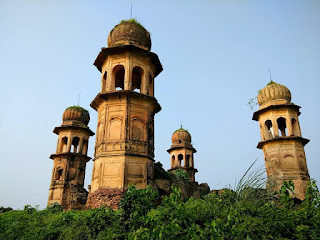 They were in love for two years. She had gone to her father's house (Maike.) He had gone to pick her up. Celebratory fire work killed him. She built him a monument. She was Sardari Begum, He was Nawab Jagangir Khan of Najibabadd, near Bijnor.
This is the second Tomb (Maqbara) built by a wife for her deceased husband. The first being the Hymayuns tomb in New Delhi.
Some women do love deeply - I must say!
This monument is dying a slow death and being encroached upon.Tomb over grave is gone, only four minarates left and they too are on the way out.
These historic buildings can be a source of revenue for any city around the World. Not here. The city is flush with money. Everyone is rich with no signs of decay n poverty. Dont need no visitors to spend money, generate jobs.
#Najiabad, #monuments, #sardariBegum, #Nawab of Najibabad,#uttarpardesh
Posted by Ye manzilen !! at 1:43 AM 1 comment: