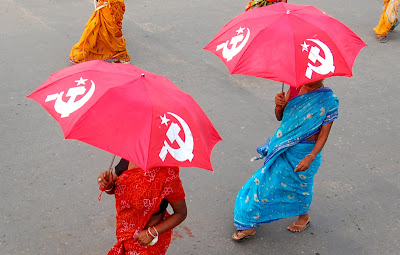 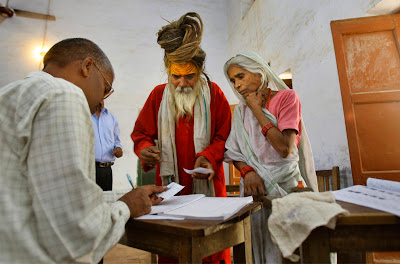 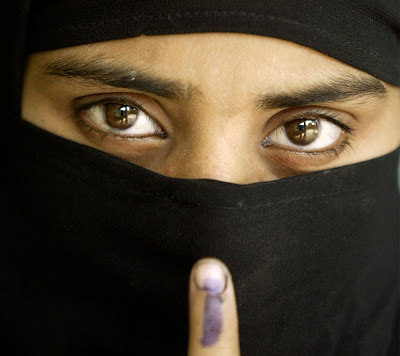 Elections are over and political pundits are busy analyzing results and writing obituaries for left and the right. I, for one don't expect that to happen and would not want that to happen.
Democracies do not flourish when a single party rules a country. In fact the democratic institutions get weakened when a single party calls the shots, without opposition asking tough questions and demanding answers.  Furehe'r had no opposition, when he unleashed holocaust on jews in Germany. George W. had almost no opposition when he decided to change the face of the World post 911, as majority of the congressmen and senators had caved in  and made Capitol Hill a one party residence. The results are for all of us to see and suffer, while 43th re-writes history.
An intelligent and visionary opposition has the power of saving the country from catastrophe. A case in example would be of Left playing hard balls with the Congress on allowing 100% FDI. Communist slowed down the juggernaut of super capitalism and halted the corporate greed in its tracks. If its not for left the newly created Indian middle class would have known the true meanings of CDO, CDS, MBS and other derivatives, albeit at a higher price. India owes a lot to the the left for staying their ground against the most powerful forces.
A party in power with absolute majority gets arrogant and see no need for seeking consensus on important issues. Opposition is ignored and silenced. In India there were a few states that had become a political jagerdari of Left, RJD and the BJP.  They thought they owned the political  agenda of generations after generations of voters. They were wrong.
These parties lost in touch with the new voter who is getting wired 24X7 to the outside world and is seeking the finest things he/she saw on TV. That voter is looking for a higher standard of living, clean parks, transperency, and adequate infrastructure.  It was easy to fool his / her parents in the name of Mandal, Kamandal and sickle, but he / she is a pragmatist, who wants all the finer things in life . Now!
Every party has a "base" from which it draws its strength and affords political maneuvering. It also seeks to fufill the wishes and aspirations of this core base. But Elections are not won on  the

baiss of the "base" alone, you need others (sometime include Mulims, Dalits and other weakers sections). in order to win elections. These ID based parties cater too much to the base, and try to win those those that are already sold out on the idea. In this election the parties that suffered most were catering to that " base."
You don't rule a country of 1 billion, 18 major languages, and every religion on earth by just catering to your core base.
And then there is this 39 year old jebroni; a student of Michael Porter  ( Harvard professor who formulated Five Forces Model in the field of strategy management), who has  been covering length and breadth of the country  connecting with voters, expanding network and discovering India. There is no surprise that he is called the architect of the congress win. Two force of the five forces model are: a - threat of substitute, and b - bargaining power of customers. While Rahul Gandhi understood these forces well, other seasoned politicians assumed the customer has no choice.
These parties can still redeem themselves by becoming a model opposition. You can work for the people even while sitting on the opposition benches!
BTW Al-Qaida means "the base" in Arabic...
(Picture Coutrsey: Boston Globe)
Posted by Ye manzilen !! at 8:53 PM No comments:

Look who showed up at Five Guys today... 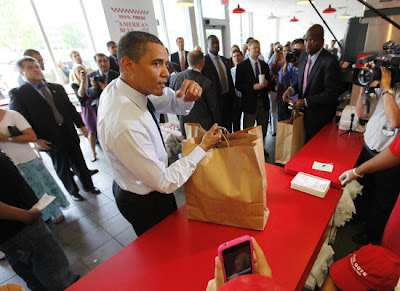 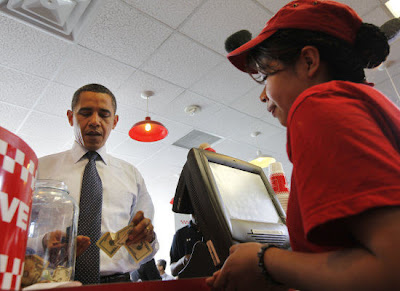 Incidently Mullah, Walty, Powell and I were at Five Guys - Lindbergh for lunch at the same time. Mullah chuckled Great minds think alike....
Posted by Ye manzilen !! at 6:02 PM 4 comments: 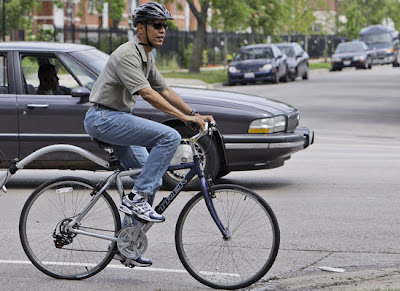 There are times when you are going to do well, and times when you're going to fail. But neither the doing well, nor the failure is the measure of success. The measure of success is what you think about what you've done. Let me put that another way: The way to be happy is to like yourself and the way to like yourself is to do only things that make you proud.

My evening started with this forwarded quote from a friend.It is so powerfull that I had to share it. Enjoy!

ps: In case you have not recognized him, the cyclist in the picture is Husain Obama.

Labels: Barkat Husain Obama on a bike, measure of success

My brother in law got me into it... 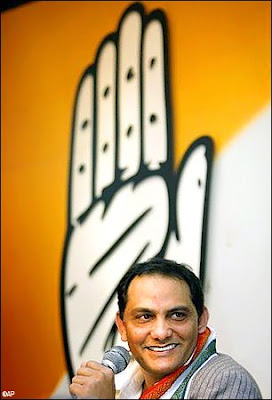 "Actually I was not into politics, but my brother in law Khaliq and my friend Jameel forced me into politics. They told me that I don't have any identity problem, and I should get into politics. It took me two years to get convinced but once I got into it- I am enjoying it"
This is how Azhar responded to a query form Parnnoy Roy, about the reason he joined politics.
I wish he had better reasons for entering politics. If I was his constituent there is no way in the hell I would vote for someone with those reasons for entering politics. I would only entrust him with Moradabad Cricket Academy,  and not a seat in Parliament.
India needs a leadership that has progressive ideas, vision and wisdom in his/ her DNA,  to make it a force to be reckoned with in the world.
I am not sure whether to take it as an honest admission of a rookie politician or just plain jane innocence, neverthless those words are not reassuring...
Posted by Ye manzilen !! at 9:10 PM 1 comment: