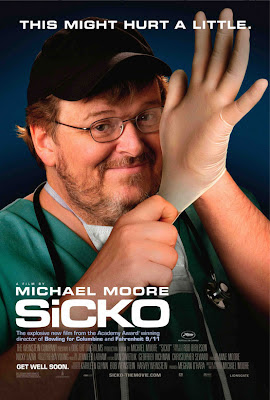 No, Michael Moore is not a Sicko. He is a filmmaker with balls who has guts to make films on subject that profit-oriented filmmakers do not touch with a 20 feet pole. He has been using his camera to start debate on various issues from Gun Control to Unneccesary Wars and Profiteering, in order to bring changes in the US and the World.
Sicko is the name of the latest documentary that he made about the broken health care system in America.

Even with proper insurance so many benefits are denied like this woman who was taken to the hospital in an ambulance after a head-on car collision. The insurance did not pay for the ride.

I experienced this broken system first hand when I was diagnosed with a Hernia in 2005 and Doc recommend a minor outpatient surgery. That was the first time I was going to be cut so I was doing some heavy research in hernia forums. I came across many folks who had the same problem but were living with pain, as they could not afford a $7000 - $10,000 surgery cost. My heart went out to them, as I knew the severity of the pain. Surgery cost me $7500 out of which I paid about $700. (It would have cost me $2 in Nair Hospital in Bombay or about $200 in a private hospital.)

These days I am seeing a Dentist and even though I have an excellent insurance coverage. The Dentist did my exam and gave me a menu with prices tags to extend my chewing life. The total is $2200 with insurance coverage. Today, I can fly to India for $1200, be with my family n other jebronis, and get the same treatment done for $75 with a private Doc or for 5 Rupees in a Government run hospital.

I have been missing Indian health care system. These are the times when I develop respect and admiration even for the tainted politicians of India, for keeping health care the way it has been.

I think a man / woman should consider him a success if he/she has the ability, irrespective of dollars in his pocket, to lay on the beach and watch the sun go down and who on his / her death bed says “ man I did my part, I tried to justify my birth...thank you all for your support”. To me that is a well-spent life.

India is blessed to have a good numbers of Social Activist like Ananat Patwardhan, Mahesh Bhatt, Javed Anand, Teesta Stelvad, Shabana Azmi, Arundahti Roy and many others. These people are going to be so in much peace and sukoon at the time of their deaths, as they would have done their parts in this world.

No matter what religion these jebronis belong to, the administration up there (if it rewards human goodness) will have a hard time denying them a permanent abode in heaven....

Someone had shown a great interest in the ghazal, so here it is... 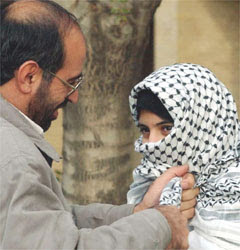 Last night I was at the Blockbusters when I received a call from an unknown number in India. I was surprised, as my folks in India are not known for their communication skills. It was a girl's voice, sweet and silky.
Caller: May I speak with Shahid Sayed please?
Me: Speaking, go ahead....
Caller: DADDY!! , main A*** bol rahi hoon. Kaise hain aap?
Me: What a surprise...Beta tum?

She kept talking, mostly inquiring about me. I was responding to her, but my mind was engaged in re-living that night of 1995 when she along with her parents were brought to me by a friend. They wanted me to help their only child with a favor. I was very disturbed and upset because of a death in the family. We were devastated at that untimely loss and this was the second day after the burial.

I had decided to excuse myself, as I was not in my senses to do anything. However, I met them as a courtesy to my friend. And there she was.... five year old kiddo with twinkles in her eyes and a nervous smile on her face. I shook hands with her father, bent down to greet her, looked into her eyes and then something in me took over...I agreed to their request.

From the very next morning I became her Daddy. I remember spending few hours with her in some place, which was full of other dads and moms. I remember getting stressed thinking what if this does not work out? This masoom’s life, or a part of her life depends on how well I perform in the next one hour. Her life or part of her life depends on MY ACTIONS... God, help me please as I do not want to let her down...

I could not keep in touch with her family, as I would have preferred. So, here she was after 12 years...

This is life is all about I reckon. Full of surprises. I had no clue back in 1995, that a few hours of my investment would grow up to be a sensitive little girl who would not want to see her Daddy alone...

It was 2:30 in the morning when Manohar Parsad Yadav called me from his home town in Bihar.

On this day when the world has just finished celebrating Father's day I am witnessing the lack of communciation between two people that must be talking to each other on hourly basis. However, I must confess that I do not have much experience of communicating with my father either.

I remember his "dehshat" and anger was so well known that when he used to walk in the house everyone from mom to small kids used to look for cover. Invariably, I used to find myself in the middle of a patang (kite) match. I was so scared of him that I used to freeze and as a result jebronis who do not know how to spell kite, used to kato my kankawaa (patang)...

I have grown up now and have a 100% success rate in kite flying. Not that I have learned to cope with an angry father and ladao patang at the same time, but I have completely stopped flying kites!!

Coming back to father-son duel - I think it is really sad that in 21st century we have not been able to bridge the "emotional gaps" in relationships. We have coolest means of communication but we have stopped expressing to each other. During my last trip to Mumbai, I observed that Mumbaiakrs are so short on expression. If I have to write a small list of dialogues that I heard during a month of stay it would be:

I live on words and humor. For me being not able to connect to any human being be black, white, brown, male, female, young or old is an insult. I tried to come up with something humorous and new that I could suggest to Manohar but failed. I don’t know why I could not fill that "emotional gap" which my friend Manohar was experiencing that Saturday afternoon in Madhuban, Bihar.

This is how it is on father's day!