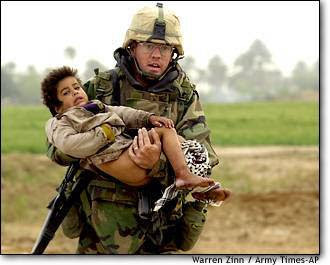 "The photo above captures everything that Americans wanted to believe about the Iraq war in the earliest days of the invasion in 2003. Pfc. Joseph Dwyer, an Army medic whose unit was fighting its way up the Euphrates to Baghdad, cradles a wounded boy. The child is half-naked and helpless, but trusting. Private Dwyer’s face is strained but calm.

That story turned bitter years ago, of course. And the mountain of sorrows keeps growing: Mr. Dwyer died last month in North Carolina. He was 31 and very sick. For years he had been in and out of treatment for post-traumatic stress disorder and addiction. He was seized by fearful delusions and fits of violence and rage. His wife left him to save herself and their young daughter. When the police were called to Mr. Dwyer’s apartment on June 28, he was alone. They broke down the door and found him dying among pill bottles and cans of cleaning solvent that friends said he sniffed to deaden his pain"....(New York Times Editorial, July 15, 2008)

"When people would teasingly call him "war hero" and ask him to tell about his experiences, or about the famous photo, he would steer the conversation toward the others he'd served with. But Dwyer once confided that another image, also involving a child, disturbed him.

He was standing next to a soldier during a firefight when a boy rode up on a bicycle and stopped beside a weapon lying in the dirt. Under his breath, the soldier beside Dwyer whispered, "Don't pick it up, kid. Don't pick it up."

The boy reached for the weapon and was blasted off his bike." - Yahoo news

It is unfortunate that a day after my last blog entry I found this news about Pfc Joe Dwyer. Dwyer told Newsday that he'd lied on a post-deployment questionnaire that asked whether he'd been disturbed by what he'd seen and done in Iraq.
Sad indeed...

While traveling to work today...I was thinking "who is reponsible for the deaths of the innocent civilians in Iraq in Afghanistan, is common man so vulnerable to call of the politicians?". It is'nt fair, the question that always haunt me is Which nation will dare to speak against Mr. Bush?

There you go again!

J: I promise the next one will be positive stuff....I cant suppress my spontaneity...can't go against my heart...that's all I got...

Suhail: People are busy in " Khao , Khujao n Batti Bujaho" bhai. They either underestimate themselves or are "retarded" as Mulalh Luis calls them....