Is there something wrong? 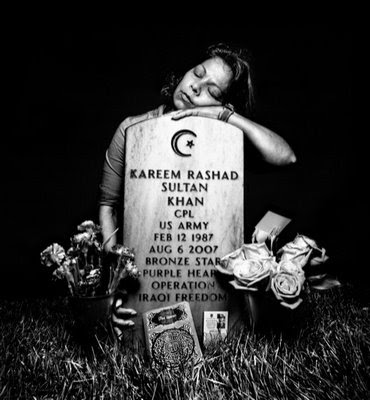 "Is there something wrong with being a Muslim in this country? The answer is no. That's not America. Is there something wrong with a seven-year-old Muslim-American kid believing he or she could be president? Yet I have heard senior members of my own party drop the suggestion that he is a Muslim and might have an association with terrorists. This is not the way we should be doing it in America.

I feel particularly strong about this because of a picture I saw in a magazine. It was a photo essay about troops who were serving in Iraq and Afghanistan. And one picture at the tail end of this photo essay, was of a mother at Arlington Cemetery and she had her head on the headstone of her son's grave. And as the picture focused in, you could see the writing on the headstone, and it gave his awards - Purple Heart, Bronze Star - showed that he died in Iraq, gave his date of birth, date of death, he was 20 years old. And then at the very top of the head stone, it didn't have a Christian cross. It didn't have a Star of David. It has a crescent and star of the Islamic faith.

And his name was Kareem Rashad Sultan Khan. And he was an American. He was born in New Jersey. He was fourteen years old at the time of 9/11, and he waited until he could serve his country and he gave his life."
These are the comments made by General Colin Powell while endorsing Senator Obama for the Presidency of the United States of America. He referred to this picture when speaking to Tom Brokaw at Meet the Press this morning. I had no clue which picture he is talking about until I found it this evening. I looked at this picture for long time and felt deeply for this mother whose other 20 year old child, most likely would not be considered "clean" today unless proved otherwise....what we are looking at is not a headstone but a mom's heart ripped apart and buried in the ground.

This is the America that we all need at this crucial moment of our collective civilization!

i never believed in religions.There should be none and all should be equal.This will result in harmony.I don't see any other way.

this pic says so much..what it doesn't you did.

Yes, Divisive Politics and all the talk is good.

Yet, singling out India is not fair. If US has had Lincoln & Jefferson - We have had Sardar Patel, Maulana Azad, APJ Kalam. For Steve Jobs & Warren buffett - we have had Murthy, Sunil Mittal, Tulsi Tanti, Premji & a LOT MORE.

No country can ever claim to be free of the ills you have cited. It depends on society more than the government to realise the righteous path.

he took her as she was..

listened to all that she said..

saw all that she made him see...

and while he was running his fingers through her hair..

a bomb exploded and he woke up..

just to search her everywhere

he was a muslim

@Vicky: It is sad. This war will never end for that mother.....till she herself dies.
@How do we know: Thanks ma'm. You are right. The photo says all...

@all talk with no action: Well, excellent points there!

However the status of our progress can best be measured by the fact that an ex-MP and a heartthrob of yesteryears along with a Nawab of Patuadi, (a future son-in-law of Kapoor family, a boy friend of one of the most talented actress of today) and a foreign educated actor can not buy a house wherever they want. They are both confined to the Muslims enclaves of Bhindi Bazar and Bandra.....I don't call it progress.

At least that was not the case of India that I have described in this post, back in the days...

The capitalists you described were born with silver spoons...so they don't count.

And finally, you only criticize those that you love and care....coz you want them to see the big picture ( Have I criticized you enough?)
LOL...Peace!

@Anirduh: So Gulzar is writing in english now?
:)

I don't think mittal and murthy came from ultra rich families. They had modest backgrounds.

Yes, I do agree that bias & discrimination exist in the country. But where do they not?

Most industrialised nations have been hot-beds of racism and other ills.

As I said earlier, it's upon people to know what's right and wrong. This is too big to let the government decide for us.

Moreover, If I love someone, I would probably lead by example (praying & hoping that he follows) rather than criticizing ! :)

Very moving picture!!. i concur with you.
anser azim

@All Talk:
If Lyndon B Jonson had not signed civil rights act of 1964 ( and waited for the society to decide what is right and wrong) , we would not have had a black man on his way to the White House....it is not even my opinion but a fact!

Ansar Saab: Thanks for stopping by...

Loosing a 20 year old is not that easy. War is difficult to define, understand and difficult to fight. In my opinion 4000 American lives that have been lost could ahve saved 500, 000 Iraqi lives and admiration of the world. After six years of endless war the take home is some of these innocent lives, their bodies and lots of life long pain for the loved ones.In the span of 100 years people of the world have become more uncivilized..
hamesha poochna chaheta tha ki yeh " movie ka kya chakker tha/hai"""
best wishes
anser azim

Ansar Saab, Sahi khaa aap ne war ke baare main. This war will never end for the loved ones of those that died....Upar wala Sabr de....

Thanks a lot for ur wishes again....

I am also saddened by a lot of the discussions that took place during this election season. So what if we did have a Muslim president? While Barack Obama is not a Muslim, the whole idea that our country has turned an entire population into villains is very scary to me. I am not scared of people who are different than I am.

@the Cleaner: Amen to what you said brother.

This was the most humiliating US election for me since I started taking interest in it....Given the facts I was expecting the margin of victory would be 540-0, but the "base" is looking in rear view mirror...

Thanks for stopping by...