The truth about cats and dogs... 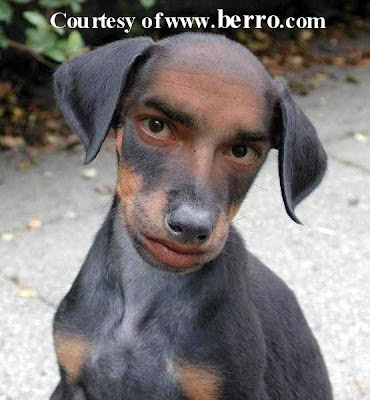 “People, I can’t see, my mind is dead and I am totally exhausted and will not be able to drive back home-- someone please either drop me home or take me to your house and put me to sleep for tonight.”

I announced that to my "Investment Analysis" class a few weeks ago amid roaring laughter. Folks, enjoyed “put me to sleep” thingy and went back to their conversations. A couple of potential volunteers showed interest and one of them, my favorite one, even stopped by my desk. (You know you have arrived as a writer, when you can predict the reactions of your audiences, and this time I was right on the money.)

Volunteer: Hey, Are you ok? What is going on?
Me: Nothing, just tired. I have too much going on with full time job, script writing and these four courses.
Volunteer: Oh, I am sorry! Take it easy. Look, I would have taken you home but you know Toby lives with me…
Me: That’s cool. I can sleep with Toby in the living room….it is just one night.
Volunteer: Actually, Toby is my dog….
Me: No problem…I can sleep with him.
Volunteer: Well, Toby sleeps with me on my bed…
Me: Like I said, I will sleep wherever Toby sleeps…I am a man of words (You just can not take Mumbai out of a Miya bhai!)

I have been observing American love affair with things doggy for quite sometime now. And I am surprised to see that this habit of "having dogs" has taken obsessive proportions, especially when it comes to blondes FPNs. I have seen simultaneous promotions of dogs and demotions of men in many households as soon as the dogs arrived.

Even Mullah Luis gets fired up when talking about his girl friend and her two dogs. He says, they have cost him almost ten thousand dollars in two years by tearing up the carpets and just messing up the place. What really makes him mad is that his FPN does not consider this additional cost as a cost of maintaining dogs. She thinks that dog cost only dog foods. In addition, it is his duty to “walk them” at least four times a day. As a result he ends up spending more time with dogs than with his southern Belle. Mullah says “In a house cohabited by an FPN, a dog and a man – there is only one who is really enjoying life and it is NOT man!”

And then there are love affairs that get derailed as soon as girls find out that the guy they thought “perfect”, does not like pets. A friend from Dallas, TX dropped her Pakistani boyfriend because he was not fond of dogs and she could not take his indifference to her dog any more. Well, she has no idea that per famous humorist Mushatq Ahamd Yusufi, “Muslims do not take those animals as pets that they can not eat!!”

Well, there are many more cases I can recall. The point is, what is going on in the other half world? What lead to this over obsession with dogs and other pets among females? A sociologist can answer those questions with more authority and qualitative research but me think that women are trying to fill the gap of loyalty left by men. The only claim to fame that dog have is loyalty. They are the only animals on planet that earn their livelihood on being loyal. Women know that dog is the only one who would not react negatively to their ageing process, ups and downs of life and the break down of other things they hold dear…

The second reason that comes readily to mind is the need to love and be loved. We all have this innate need to love someone unconditionally. All right, not all but most of us! And an ugly looking Chihuahua fulfils that need with perfection. Have you seen a dog jump all over you as you enter the house after work? It is a good sight to see and a horrible thing to experience, that in spite of all your charm and wit, a dog wins each time in getting the best deal.

And finally, women of all ages and nationalities like to have kids. It is part of their DNA. They put off having kids due to work and other ambitions. A dog becomes that child that they could not have.

Sometime I think going back to the “basics” is the only way to salvation….

Mullah thinks that women, by taking dogs all the way to beds are trying to convert dog into a human being. He doubts Mr. Darwin’s theory of men going from 4-legged monkey to two-legged men a mater of mere “selection”. He thinks there must have been woman who turned chimps into men…and it is the turn of dogs now to be converted to men. However, he highly doubts if dogs would enjoy being men…

Well, I ended up driving home after the class. It was well past 11 and I drove at least 50 mph less than the posted speed limit, which was 55 MPH. Thankfully no cop stopped me for driving too slow. What I really wanted to do was to turn around and go north, and show up outside an apartment in Cartersville, GA . I wanted to do a Dahrmendara Paa Ji stunt and call that damn Toby out and shout “ Kutte Kamine bahar nikal, main tera khoon pee jaoonga”…

Labels: Evolution of dogs and other things...