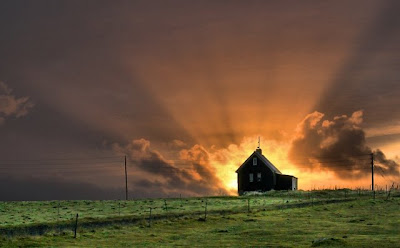 Its 2 am in Delhi, India. I just got off the phone after arguing my case with Sunita Mishra of " Aap itne haseen na hote to bhai bana leti " fame. I am the only one who can wake her up at 2 in the morning and start an intellectual conversation without getting a lesson on time etiquette!
The issue for the night was home - sweet home as they sold to all of us long time ago. I am not anti-civilization but I have come to the conclusion that it is the quest of this sweet home that is the root cause of all the wars, hunger and poverty in this world. This is the genesis of all the evils that we see on TV and read in the papers every day.

For a moment go back to your teenage years when the world used to look so romantic. When we knew only friends and not Hindus, Muslims and Christians. When we used to hang around the St. Mary's Church at Byculla at certain time to get a glimpse of a christian girl who used to be a visitor there. We used to wear cross and show up in the church because we wanted to be friends with her and we did not believe any made walls and beliefs should stop us.

We were in the business of breaking walls no matter high and mighty and un touchable they were. Some jebronis still do that in the world albeit on a minor scale. World was an idealistic place where no one was a stranger. We were like one big family. We used to fight along with our Hindu friends against any bully that showed up to fight them.

Now after marrying the girl that parents selected after checking the jaat, caste and religion; buying a house after making sure no one "who is not like us lived there" and sending our kids to "our" types of school, we have become so unlike what we were when we were growing up?

What the f***k happened?

The search for that "Tinkon ka aashiyana" is one reason beside our communal DNA. How else could you explain a guy who dated Muslim girl and almost ran away with her to marry while in college, is now making sure his kids don't make "Muslim friends?" The same chap gives charity only to Hindu organization and blames Muslims for all the evil in this world? Same goes for the Muslim gentleman too - no exceptions in this Olympics of hating other human beings.

I think buying or building a house brings a sense of permanency in human mind. That permanency is the reason in limiting a man's vision. Throw in a wife and a kid and now you have a gentleman who is willing to bomb the whole world if need be, in order to save these two. Because they are HIS own, that is HIS house. This gentleman NOW wants to play God to his family, and make sure they and their future generation are safe against the perceived enemy. This love for my wife, my home and my kids makes us so small and childish that it seems so funny.

Julia Roberts made a documentary on some tribes living in Mongolia. She went there with a crew and spent a couple of weeks in the middle of nowhere. You see her from getting shocked at every day lives there to finding peace and serenity in that environment. That tribe has no doors, no locks - nothing. Nobody steals anything there. Even the horses are left un-tied at night outside and yet they don't run away. These tribes don't own things and lands. They just stop at a place, live for sometime and move on. They don't have wars, and they don't practice hatred there. Everything is considered temporary in their world, which we don't seems to get!
Most of my friends have house, kids and wives . Every time I visit their homes these thoughts expressed on this blog get reinforced. I witness their turnaround from a global citizen to a " Khao, Khujao and Batti Bujaho" type. They don't care what happens in the the next gully, forget about the next mohallah or the next town. As the kids are growing and becoming open and internationals these parents who were like their kids 15 years ago going local - very local - only 3500 Sft worth.

Sunita wants me to own a house, get married and settle down. I too want to get married and settled own but without owning lands and things as they, in my mind are the beginning of the journey of selfishness. The folks, I consider my heroes never "owned" things. Be it a general who ruled half the world and lived in $5 tent, as Bill Clinton calls it, to humanist businessman JRD Tata.

Today, in this world everyone and everything looks mine. Why would I want to exchange this wide world for 3500 SFT of concrete and wood?

Mullah says I should watch out for this tendency of thinking "everything is so mine" as it may one day result in believing that other people's kids and wives are yours too?

Well, I will take the fifth amendment on that one!
Posted by Ye manzilen !! at 4:42 PM

omg..i am so lucky that u came to my blog..you have wrote so wella nd covered the biggest issues of all the problems the religions create.

Their can be no peace till their are religions ..they separate us..create classes ..but we all are same..human beings.

rolling you sir .
keep hittin back

Ani:
Are nahi, hum kis ginti main nahi! I will read ur article in a few

Love sign: Well, I dont believe in "hitting" in any way. I think reason can take of most of the problems. I am just a small time jebroni...Thanks for stopping by....

The issue at hand though is quite an intense one...and wouldn't want to stress much...

People should respect themselves first. Most important is self respect...everything else shall fall into place...

Hmm...Talking about closed mindsets and getting communal by the day...

I guess people first need to have respect themselves...then be accommodating and accepting of others...

When one community is too liberal and open...always accepting and tolerant and it is not reciprocated by other communities...

That's when most problems arise...