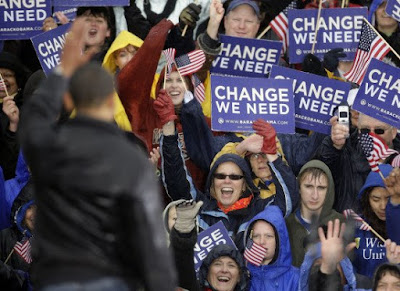 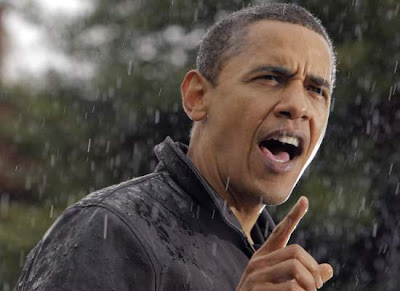 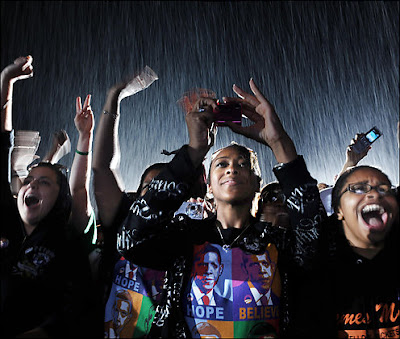 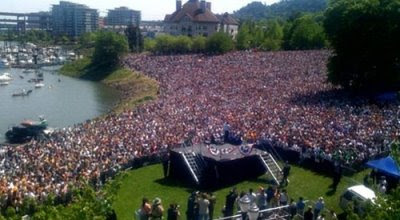 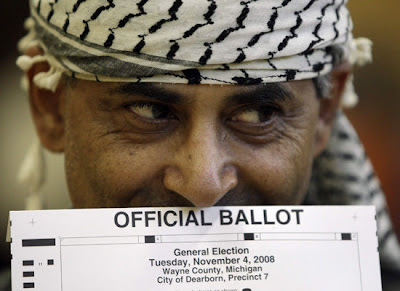 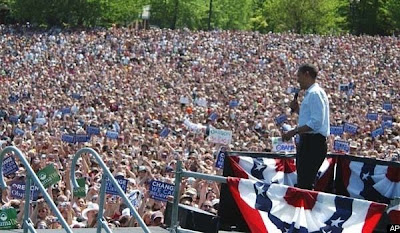 It was at 2004 Democratic convention that when I heard this black politician by an un-usual name of Barrack Obama give a passionate speech. We all had gone through the pain and agonies of "hanging chads" in 2000, and were glued to the TV sets to see how Democrats plan to mount a challenge to a war President.

I felt electric current run through my body when he delivered those lines. I reached out to the nearest “ khbusurat muskurahaton" wali FPN and said " Banda bada zabardast hai – Presidential material. This guy will run for office one day!” She agreed with me, which was very rare occurence those days.

Soon after the speech that jebroni came down the stage. Gwen Iffil of PBS interviewed him further revealing his inner personality. I found a consistency in his thoughts and some frank honesty. It is easy to act out a speech on stage but difficult to survive an onslaught from the reporters. He was impressive with his clarity of thoughts and choice of words. I found him to be a thinker and intellectual type, something to look out for...

So, when I saw him that chilly morning of February 10, 2006, outside the old state Capitol building in Springfield, Illinois announcing his candidacy, I was not surprised. He spoke from the heart and was full of hope and wisdom. So far so good, the question that I had was how far he would be “allowed” to go before he was knocked down by the establishment? He had said “This campaign has to be about you and not me”…..

Thus began a journey that history will hold dear for millenniums to come. Schools, colleges, holidays will be named after this man called Barack Husain Obama. Films will be made on his life and he will occupy the imagination of the writers and thinkers for hundreds of years to come. What a story….what a man!

I have followed his every speech, his every move, every act on the campaign trail in the last two years. For a student of political science his journey is a great case to study. I saw how main stream America reacted to him and how all the events played out.

When John McCain suspended his campaign to go to Washington DC to help pass the bailout package I thought it’s over for Mr.Obama. That was a clever move from a veteran as one should stay away from politics to help the nation. He refused to suspend his campaign and said "a President is supposed to do many things at once", thus forcing Mr. McCain to show up for the previously scheduled debate.

This was the first time I made political contributions as anyone who is willing to knock down man-made boundries ought to be supported. I do not see him as black or someone with a Muslim name. For me, any politician that uses the sentence “let us change the world” is an automatic ally. Someone to help out with, someone to make room for, someone to fight for….

I am hoping for a day when he makes a speech that goes like “ There is no Muslim World, Hindu World, Christian World and a Jew World – there is one just World. We have friends in Israel as well as in Saudi Arabia. We hang around with Africans and fall in love with the Turks. We worship the same Abrahmic God in a synagogue as in a Mosque. We may have different colors of skin, speak hundreds of languages, eat all kinds of food and live in 183 countries but we all are ONE PEOPLE – all 6.602 Billion of us.

We will not let them divide us in the name of religion, color and nationality. We will not let them make us take arms against each other in Iraq, Dafur and Kashmir. If a Kasmiri Pandit is thrown out of his home then we all becomes homeless. When a 50,000 lbs bomb is dropped on an Afghan family then we all would consider it a crime against all of us. We will rise and shut down these bazaars of narrow-mildedness that sell nothing but hatred for fellow human beings…we stand together as one people, one nation so help us God!”

BTW that “nearest FPN” ended up watching the acceptance speech of Mr. Obama farthest from me - with someone else. What differnce a mere four years can make.I wonder if anyone noticed that she was thinking of the last democractic convetion in 2000 and more. Good for her!

I had tears in my eyes when Barrack Obama walked up to the stage and said “And to all those watching tonight from beyond our shores, from parliaments and palaces to those who are huddled around radios in the forgotten corners of our world – our stories are singular, but our destiny is shared”……

Sure Mr. President our destiny is shared...

Sure is......
The last glass ceiling has been broken....world will not be the same again!!